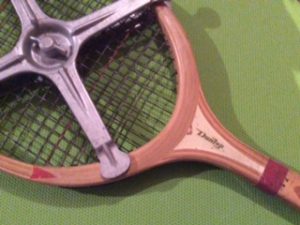 I share one thing in common with my mother at least. (Well, probably a few others….)

At least for the moment.

As the game evolves though, that may change.

It used to be a rather civilized game, but it’s starting to become as barbaric as any other professional sport.

Those announcements of players.

Why all this building up of players into super heroes? Why is being human no longer enough?

As super heroes, the players are something of a disappointment.

For one thing a super hero should set an example and not behave like a three year old.

Is the behaviour of players on court now an example to youngsters?

The undisguised shouting of foul language.

The absurd clenching of fists after each and every point. Where did this come from? It looks completely stupid.

Even demanding more applause from the crowd when the player feels he’s played particularly well.

Interesting that you don’t see the women demand more applause from the crowd.

Something I’ve never understood though.

Why do the spectators applaud after each point?

It seems ridiculous to me.

Does a secretary receive applause after each letter typed?

Does a teacher get a pat on the back after every lesson?

Then why applaud tennis players for simply doing their job for a few seconds? Crazy.

I can understand applause for an exceptional point.

But as things stand, there’s nowhere to go when the exceptional occurs. Apart from more noise.

But don’t get me started on the behaviour of the crowd, which sometimes borders on the intolerable (2017 Australian Open for example).

Yes, we’re a long way away from cucumber sandwiches and the importance of participation.

But that, as they say, is progress.

May your life never become an endurance test.

This site uses Akismet to reduce spam. Learn how your comment data is processed.