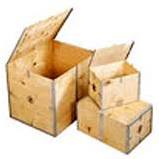 When I was a kid, I went on holiday with my family once and we stayed at a place in the West Country, UK.

The owner told us a story about a woman he knew who’d been a missionary in China all her life and had just come back to England. He was bemoaning the fact that all her possessions for shipment had fitted into a tea chest. He thought that it was incredibly sad that she had worked all her life with so little to show for it and my parents agreed.

‘Just one tea chest of things, after a lifetime of work,’ he kept saying.

I was perhaps about fourteen at the time, but this story has stuck in my mind over the years, probably because I wasn’t sure whether I agreed with the others about this even at the time.

There was something about the discipline involved in not collecting stuff or in making the choice to throw a lot of it away that rather impressed me.

But I think I know the limitations of possessions pretty well.

One of my favourite self-quotes is, ‘More is not necessarily better,’ and that applies to everything but especially to music, I’ve found.

It’s amazing how the desire to embellish and vary can kill the emotion.

But there are some possessions I’d rather not be without and maybe one should start from that end and work backwards.

My Petrof, for example, even if I don’t play it nearly enough at the moment.

What possessions would you rather not be without?

All good wishes for the Christmas season and for 2019.

May your life never become an endurance test….

P.S.  I must give credit where due.  I was reminded of this story while reading a short post by Derek Sivers entitled Subtract.  Well worth the read!

I saw this wonderful video by Marie Forleo on YouTube:

Can’t Seem To Get Started? This One Idea Could Change Your Life

Never a truer piece of advice.

And well worth spending the seven minutes to watch.

I’ve already talked about Marie TV in a previous post:

Performance Tips (No, Not That Kind…)

As I mentioned before, the channel is really targeted at entrepreneurs and business activities, but many of the pieces of advice are relevant to any sphere of activity.

Marie is quite a character, has a big following with her YouTube channel and is fun to watch.

Almost exactly a year ago, I brought out my second full album of original music, MY TITANIC.

Now bringing out the first album, THE LESS YOU DO, in 2010, had been somewhat of an uncomfortable experience. I’d gone into the studio with eight musicians and an arranger and it had all got rather complicated.

So for the second album, I wanted to go a different direction and I was thinking about trying to record some tracks on my own, but I didn’t feel ready.

I was wondering what to do when I discovered a remarkable and now unfortunately defunct site called CrowdAudio which allowed artists to run mixing competitions.

As it happened, I’d recorded a ballad with just a piano-voice arrangement a fews days previously, so I decided to put it in and see what happened.

147 mixes and much listening later, I’d discovered the engineer with whom I went on to record the whole album. 3ee happens to live in Romania.

Now I wasn’t at all sure about recording the album on my own at home. But I liked the initial mix and I thought I could maybe try to record a few more songs before getting stuck and hiring session musicians in to a studio. Although I worried that the song arrangements would be too thin and the instrumental playing too weak, I persuaded myself to give it a shot.

So I started recording the album and sending the results off to Romania.

I decided to get each song mixed and mastered before moving on to the next.

Gradually, the number of completed songs built up.

And finally, I reached a tipping point where I said to myself, “What the hell, let’s do the whole thing like this.”

And the interesting thing was that the experience of recording at home generated new songs as I went along, songs that perhaps I would not have written otherwise.

In the end, many of the songs that I had initially wanted to record didn’t get on the album because I was enjoying the process of writing songs from scratch and recording them, all within the space of a few days. Some of them really sped through the “factory.”

Did I feel ready to record the whole album by myself before starting?

Is the result perfect?

Could the arrangements be better?

But it doesn’t stop me from being proud of the album and grateful for the experience.

And as Marie points out in her video, there’s really only one crime.

The only real crime is not starting at all.

When I was thirty, I was worried about my pension. I’d worked full-time for a couple of years, gone back to university, changed direction, changed direction again, wanted to change again. Not at all what a well brought-up middle class kid should do. I was sure the heavens would take their revenge later on.

At about this time, there was an advert in the papers by an insurance company. It showed a picture of a little wizened old man with a barrel organ and an equally wizened little monkey and suggested that this might be my future lot when I reached retirement if I didn’t have enough insurance set by. It made me laugh and afraid at the same time, because I was pretty sure I wouldn’t have enough to retire on if my life continued as it had.

I was sixty at the end of May of this year and now I know for certain that I don’t have enough to retire on, in spite of all the investments and experiences in between.

But the thing is, the thought of ending up in the street with a barrel organ and a small monkey no longer fills me with fear. I’ve got my music and a good singing voice and I think that if I had to, I could get by on the street. In fact, there’s a part of me that is even attracted by the idea.

Perhaps the things that fill us with fear are actually the things we could fall in love with. Is it true for people?

Here I am in Paris to promote my new album MY TITANIC on Radio Aligre FM in Jazzbox on Saturday evening. Wonderful weather.

‘I love Paris in the spring time….’

You may have realized that I’m a singer/songwriter amongst other things, but if you didn’t, no matter. This post, however, is for people who like to sing.

If you do take singing seriously, then you have probably heard that dairy products are not the best thing for your voice. This is because they tend to encourage phlegm which in turn makes singing more problematic.

Ever since childhood, I’ve always been a great fan of cereals, preferably low sugar or no sugar versions. My very favourite is Bite-Sized Shredded Wheat. Curiously, this product is not available in Switzerland. I say curious, because the brand belongs to Nestlé since they bought out Nabisco. You can get the crappy sugar-covered ones but not the original 100% wheat variety. But I digress.

Anyway, you can’t have cereals without milk. And I’ve noticed that if I have a cereal in the evening and do a voice warm-up the next morning on my way to work, then there is more phlegm and this can cause problems.

But I recently made an interesting discovery.

If you like milk, then you have probably noticed that the quality of pasteurized milk is going down. When I went to England last year, I was appalled at how bad the pasteurized milk had become. And recent milk in France has also been bad. Even Swiss milk has deteriorated in quality.

Now as part of my health research, I recently decided for a variety of reasons to try out raw milk.

I’ve noticed that if I have a cereal with raw milk in the evening, then I don’t have problems with phlegm the next morning when I’m singing.

So if you love singing and milk, you can heave a sigh of relief and continue with both.

It does, however, beg the question of the effects that pasteurization has on milk… but that’s another article.

Let me know if you try out this tip and discover the same thing. It would be great to hear from you.

Have a great Ascension weekend, wherever you are.